“I am excited about this year’s growth over the first year of the Challenge switching to Rok,” stated Challenge of the Americas owner Andy Seesemann. “Overall, entries were up more than 20% but, in reality, our Rok entries grew by almost 50% over last year, as we had Briggs 206 as part of the program last year adding to our total.  This is a huge win, as we are watching other programs in the West shrink every year.”

“The Rok Shifter program was huge for us, with an average of 30 shifter competitors at each event,” continued Seesemann. “This was also in only two categories; Senior and Masters Rok Shifter.  It’s obvious that the racers have made their choice, enjoying the Rok Shifter experience while racing in larger fields.  Although we had a core group of shifter racers at each event, we had 56 unique competitors between the two categories, which bodes well for the California Rok Championship and the future of shifter karting in the United States.”

The prize package each season with Challenge of the Americas is among the best in North America. Six of the series champions earned tickets to the Rok Cup International Final, set for South Garda Karting facility during the week of October 7 in Lonato, Italy. Vice-champions in those categories earned a race entry to the growing ROK the RIO event, scheduled for October 28-November 2 in Las Vegas, Nevada. Third-place finishers were then awarded an entry package to the new California Rok Championship, a four-race program set to take place this summer. The three remaining title winners earned tickets to the ROK the RIO event, while second place in the standings earn the California Rok Championship package, and third a product package including Bridgestone tires and VP fuel.

It was a great breakout performance on the year in the Ruthless Karting Senior Rok division for Cooper Becklin. The long-time series competitor grabbed his first series victory in his Senior debut in CalSpeed during the February event. Becklin added another victory in Tucson the following month, giving him a slight lead in championship standings heading into the series finale. The Oregon driver overcame issues on Saturday in Sonoma, ending up finishing third. Recording a fourth straight podium finish with his Sunday result, Becklin clinched the championship with a solid performance in the Round Six main event with a third victory to earn the Rok Cup International Final ticket. Two-time winner Jake Drew advanced himself up to second in the final standings while 2018 COTA champion Jim McKinney ended the year in third, recording only two podiums. 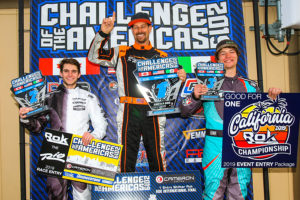 Veteran Ron White became a first-time Challenge of the Americas champion thanks to a solid performance at the series finale in the Cameron Karting Shifter Senior Rok class. The long-time shifterkart driver came into the weekend leading the championship without a victory, having earned two runner-up finishes in Tucson. This ended with a trip to his home track, as White bested one of the toughest fields ever in the category to win both main events and secure the Rok Cup International Final ticket. Two-time race winner Hunter Pickett gave White a challenge all weekend, placing runner-up both days to finish the series second in the standings. Round One victor Zach Pettinicchi completed the championship podium in third. 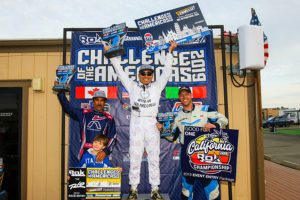 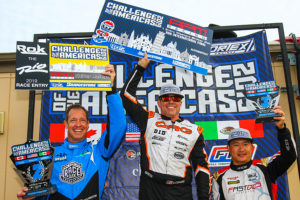 Three victories in the first four rounds solidified Rod Clinard as the top driver in the APM Racing Shifter Masters Rok title chase. Clinard needed to come away with solid points at the series finale to secure the championship in his first year competing at the Challenge. The Texan did so, placing third in both main events at Sonoma to clinch the 2019 title and Rok Cup International Final ticket. Last year’s vice-champion Nick Firestone finished in the same position for 2019, earning just one podium in the six rounds. 2018 title winner Kalvin Chen was third in the standings, also standing once on the podium this year in what was a very competitive season for the category.

Longtime Challenge competitor Derek Wang moved up to the VemmeKart Masters Rok division for the first time in the series, coming out with his first program championship. Wang entered the series finale in Sonoma leading the point standings with four straight podium finishes, yet no victories. The podium streak continued in the final rounds, this time with Wang finishing on top of the steps with victory on both days. Throughout the 2019 program, Derek finished every session within the top-three, ending up with a 20-point advantage over two-time winner Billy Cleavelin. The 2017 series champion placed runner-up to Wang to end the year with four podium finishes. Round Four victor Nick De Graaf finished the standings in third. 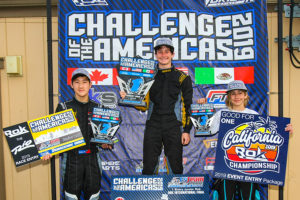 While the EsTeam Racing Junior Rok division saw four different winners in the first four rounds, the championship was a two-driver battle at the series finale. Ethan Ho secured his first Challenge victory at Round Four, moving him to the top of the championship standings heading into Sonoma. The finale was at the home track of Round Two winner William Ferguson, and he defended home soil with two victories to clinch the series championship and the Rok Cup International Final ticket. Ho finished runner-up to Ferguson in both Finals, ending up second in the standings with six podium results for the series. Round Three victor Macy Williams ended her best season at the Challenge, placing third in the standings.

Joining the list of drivers to represent the Challenge at the Rok Cup International Final is Enzo Deligny. The title chase in the Performance Kartsport Mini Rok went down to the wire between Deligny and Logan Toke. Both scored a victory at each of the two events leading into the series finale. Toke struck first in Sonoma, winning the main event on Saturday to hold the slight edge going into Championship Sunday. Deligny responded by sweeping the final round, securing the 2019 title by a mere five points over Toke. Mini rookie Anthony White, the nephew to Ron White, secured a total of five podium finishes on the season to lock up the third step of the championship podium. 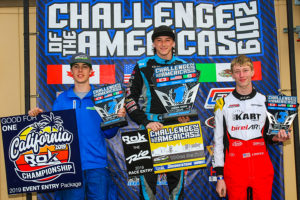 Colby DuBato distanced himself from the rest of the Forward Direction Motorsports 100cc Senior title contenders in the second half of the series to score the championship. DuBato won Round Four in Tucson and then grabbed victory both days in Sonoma to clinch the title, and ticket to the ROK the RIO event. Jackson Dunn won Round Two, earning four podiums in six rounds to finish second in the standings. Cooper Becklin added a second championship trophy to his mantle, finishing third in the title chase. 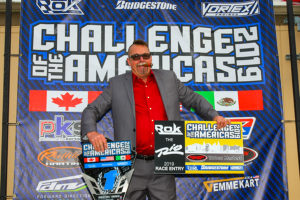 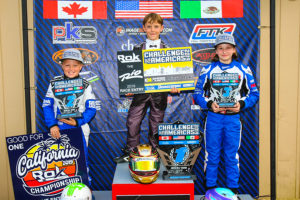 Jimmy Gregory completed all six rounds in the Acceleration Kart Racing 100cc Masters class to earn the championship and ROK the RIO ticket.

It was not a perfect sweep for Filippo Sala, however, the Italian driver did secure five wins on the season to wrap up the Empire Karts Micro Rok championship. Sala won the first five main events in the championship, coming up short for a sixth in Sonoma but won the ROK the RIO ticket with the title. 2018 champion Gage Jarvis was runner-up in both main events at the finale to jump up to second in the standings while Canadian Sydney Cassels joined them on the championship podium in third.

The Challenge staff now embarks on a new adventure – the California Rok Championship (CRC). A four-event summer series will host the same competitors, and many others, at four unique facilities in the Golden State. The same atmosphere, officials and competition you expect from the Challenge will be condensed into two-day events with the CRC, beginning on May 18-19 at the Buttonwillow Raceway Park. Registration is currently open at the CRC Registration Page.

“There were teams and racers asking for this program last year, but quite frankly, we didn’t have the customer base to support it,” added Seesemann. “With this year’s explosion in Rok racers, the time was perfect to put this program into place. Each CRC Champion will win a ticket to ROK the RIO in Las Vegas. Second place will win a partial entry credit to the event, with the competitor being responsible for their fuel and tires.  We are working on prizes for third place as we speak.”