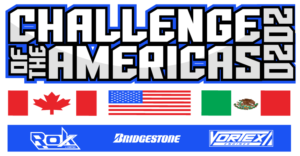 ORANGE, CA (July 18, 2019) – As we turned the calendar on the first half of 2019, plans are underway for the 2020 karting season. Among the first programs to release a schedule for the upcoming racing calendar is Challenge of the Americas. The ROK Cup USA championship series is the premier left coast winter series, set to host the 13th season when action begins in January 2020.

“It is very exciting to be in the planning stages for the 13th season of Challenge of the Americas,” stated series promoter Andy Seesemann. “The program has evolved well with the move over to the ROK Cup USA format along with Bridgestone tires, and momentum is certainly building as we close out this season and look at 2020.”

The 2020 Challenge of the Americas is moving back to the January, February and March format in which it began with back in its opening year of 2008, thanks to the help of the facilities that will host events for the 13th season. Everything begins with the opener scheduled for January 24-26 at the Musselman Honda Circuit in Tucson, Arizona. The first of two events in California begins with a trip to CalSpeed Karting Center in Fontana on February 21-23. The finale moves into the last weekend of the third month of the year, wrapping up at the Simraceway Performance Karting Center in Sonoma on March 27-29.

“Producing a schedule is the most difficult task as a promoter,” added Seesemann. “We have to take in a number of factors, not only local or regionally, but nationally with our program welcoming drivers, teams and staff from all over North America. Moving the start back to January allows us to wrap up before April, and then teams and drivers can focus on their summer programs without any conflicts. All three facilities were on our schedule last year, and are happy to have us back in 2020.”

The 2020 Challenge of the Americas class structure will be similar to last season, based around the ROK Cup USA format, with full details to be released at a later date. The switch to the ROK Cup USA program before the beginning of the 2018 season has been a successful transition. In 2019, the series grew in total entries by 20%, with an increase of 34% in the seven core ROK categories, and welcoming a total of 167 drivers over the three weekends. The two largest classes on the year were ROK Shifter Senior and Rok Shifter Masters, showing the popularity of the ROK shifter powerplant.

“We grew in our youngest category and our fastest category,” confirmed Seesemann. “Our Micro ROK class doubled in the number of drivers competing on the season, while the grids increased for both our ROK shifter divisions – Senior and Masters – providing some of the best racing for the championships. We had almost 60 unique shifter competitors enter one or more races those two categories, undoubtedly making COTA the largest shifter program in the west, if not North America. It is the strength of Vortex with the ability to produce the ROK engines consistently so that drivers are comfortable out of the box with their engine, and the ability to race it anywhere in North America.”

Champions from the 2018 Challenge of the Americas are set to compete at two major events before the season closes. Title winners in the Senior 100cc (Colby DuBato), Masters 100cc (Jimmy Gregory) and Micro ROK (Filippo Sala) will be traveling to the RIO All-Suite Hotel & Casino in Las Vegas for the ROK the RIO event on October 29 – November 2 with complimentary race entry. Prior to that, champions in Senior ROK (Cooper Becklin), Junior ROK (William Ferguson), Masters ROK (Derek Wang), ROK Shifter Senior (Ron White), ROK Shifter Masters (Rod Clinard) and Mini ROK (Enzo Deligny) will cross the Atlantic Ocean to compete at the ROK Cup Superfinal. The October 8-12 event is set for the famed South Garda Karting facility in Lonato, Italy.

ROK Cup USA racing continues in the state of California, with the California ROK Championship into its inaugural season. The first two events are in the books with the finale scheduled for Labor Day weekend at CalSpeed Karting Center in Fontana, California on August 31-September 1. Additional ROK the RIO tickets and other prizes will be on the line that weekend.