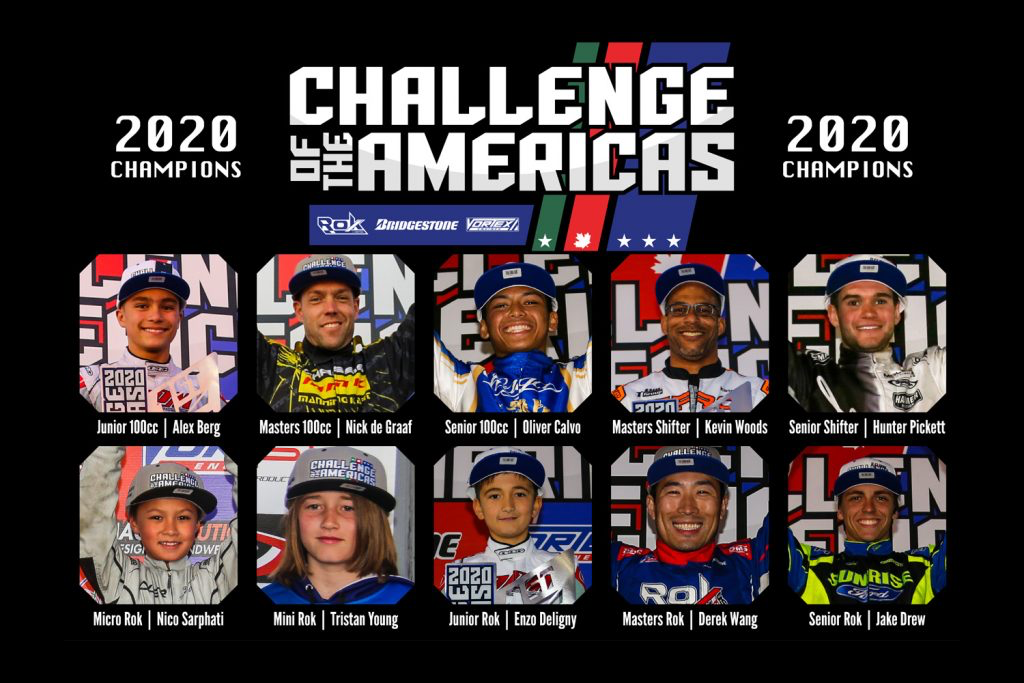 The 2020 season will go down as a historic and record-breaking one for Challenge of the Americas. The premier winter series on the left coast hosted the 13th season of the program, entering the year with hopes of setting new benchmarks for entry totals. Since moving to the ROK Cup USA platform in 2018, growth has been the consistent goal for each year. 2019 built a foundation for the 2020 season to set a new series entry total of 141 at the second event in February at the CalSpeed Karting facility. Surpassing that mark was forecasted for the series finale in March at Sonoma Raceway until the country was hit by the COVID-19 pandemic. 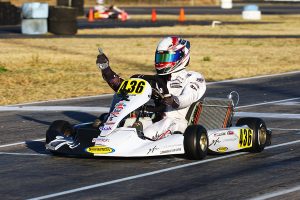 The majority of the country has remained in a ‘Stay at Home’ social distancing practice to help stop the spread of the virus. These ordinances and guidelines stalled the 2020 season for the Challenge, forcing a reschedule and eventual cancellation of the series finale. The loss of the fifth and sixth rounds of the 2020 Challenge forced the program to condense the championship format to include all four rounds contested to declare the title winners for the season.

“While the 2020 season has a disappointing end, we find our program is a strong position moving forward,” stated Challenge of the Americas owner Andy Seesemann. “To set a record after 13 years for total entries is extremely positive and shows a strong promise for the future of ROK racing in the west. Despite our program cut short, that does not take away from the honor earned by our 2020 champions.”

The 2020 Challenge of the Americas prize package is among the best in series history. The international categories – which include Shifter ROK, Shifter Masters ROK, Senior ROK, Masters ROK, Junior ROK and Mini ROK – award the 2020 champion with a ticket to race at the ROK Cup Superfinal on October 14-17 at the South Garda Karting facility in Italy. Champions in the three 100cc categories along with Micro ROK class earn tickets to compete at the ROK Cup USA ROK the RIO on November 4-8 at the Rio All-Suite Hotel & Casino in Las Vegas. Second place in the international classes take home a ticket to the ROK the RIO while third earns an entry-only prize toward the Las Vegas event. Second place in the other divisions are awarded entry-only to ROK the RIO as the third place finisher in the championship is handed a California ROK Championship entry for a 2020 event. 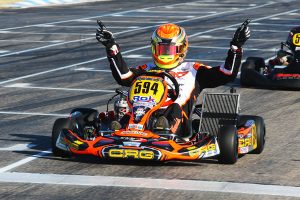 “This will be our third season sending drivers to the ROK Cup Superfinal,” added Seesemann. “It is an honor to take part in this international event, competing against drivers from around the world. OTK and Vortex do an amazing job welcoming everyone to Italy and roll out the red carpet. I’m excited about this year’s Challenge drivers who will represent us this October against the best in the world.”

Some of the best racing over the course of the four rounds for the 2020 Challenge was in the SwedeTech Shifter ROK division. Two drivers scored two wins to dominate the top step of the podium with Hunter Pickett and Jake French. Pickett swept the opening two rounds in Tucson, earning maximum points on the weekend to lead the standings heading into CalSpeed. After a tough Round Three, Pickett drove to the runner-up spot in Round Four for a third podium finish on the year, maintaining the point standings lead to earn the title. The championship is the first for Pickett at the Challenge, placing vice-champion in 2019. Cole Shade is one of the most improved for 2020 across the board, earning four top-five finishes and two podium results to end up second in the standings, back of Pickett by 44 points. While French was able to earn two victories, his struggles in Tucson cost him a run at the championship in four rounds of racing, ending up one point behind Shade in third. 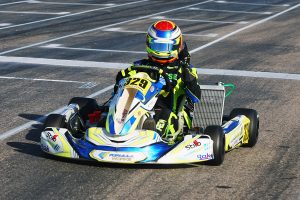 Four different drivers won a main event for the 2020 Challenge in the Ron White RacingShifter Masters ROK. Kevin Woods swept the opening round in Tucson to begin the season on top of the championship standings. After earning a podium in Round Two, Woods held on through the two rounds in Fontana to come out as the championship leader, earning the 2020 crown. Round Three winner Neil Joseph finished the year as vice-champion, 18 points back of Woods. Joseph earned a total of two podium results. It was the same total for Jimmy McNeil, who came away with his first series victory in Round Two after placing third in Round One. A tough CalSpeed weekend kept him from the top of the standings, finishing 38 points out of first. Ryan Yop was the fourth different winner on the year, winning Round Four in his first Challenge start in the category.

The Ruthless Karting Senior ROK division is always one that goes down to the wire in terms of the championship chase. Two drivers defined themselves as the lead contenders from the beginning in Tucson. Jake Drew swept the opening round to start out as the championship leader. Two more podium results helped keep Drew in the top spot of the standings. Adding another top-five finish secured the most points after four rounds, giving Drew the championship for the 2020 season. Drew is the 12th different Senior champion in the 13-year history of the Challenge. The difference between he and Oliver Calvo after four rounds is only 10 points. Calvo also had three podium finishes, winning Round Two and Round Four. A DNF at the opener in Tucson, not only the Prefinal but the Final, cost Calvo valuable points and thus one spot short of the title in the shortened season. Liam Letzsch finished as the top rookie in the category, earning two podium results on the season to end up third in the standings. 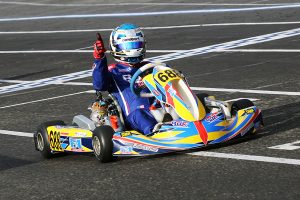 Derek Wang matched his win total from 2019 in only four rounds to claim a second straight title in the Odenthal Racing ProductsMasters ROK class. The 2019 champ won Round Two and Round Three, earning podium finishes in all four rounds to earn the most points toward the 2020 championship. Wang is only the second driver in the Masters category to go back-to-back for titles, with Donald Durbin Jr. in 2013 and 2014. His top rival was 2017 champion Billy Cleavelin. The karting veteran scored four podium results, winning the opening round in Tucson. In the end, Cleavelin was 17 points short of his second championship at the Challenge. Nick de Graaf stood on the podium both rounds in Tucson, placing top-five in CalSpeed both days to end up third in the point standings. Canadian Adam Dowler was the other winner on the year, scoring the victory in Round Four.

The numbers increased immensely in the Acceleration Kart Racing Masters 100cc division for 2020. With only one driver following all three events in 2019, the class saw a total of 12 drivers over the two weekends in 2020. Nick de Graaf and Tim Meyer – who ran both Masters categories each weekend – were the top contenders in the title chase. Meyer won the opening round in Tucson with de Graaf taking the victory the following day. It was de Graaf that came out of the CalSpeed weekend with two more podium results, securing the series championship by 29 points over Meyer. Dana Estes recorded three top-six finishes over the four rounds to finish third in the title chase. Earning the most wins on the year with two was Mike Smith, who swept the main events at CalSpeed. 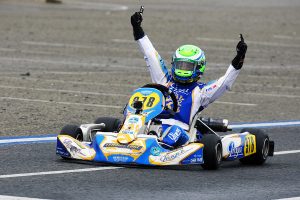 It was a dominating performance by Oliver Calvo in Forward Direction MotorsportsSenior 100cc category. Calvo was able to win all four main events to claim the 2020 championship. The opening round was maximum points, followed by a sweep in Round Two. An issue in the Prefinal forced Calvo to climb his way to the top of the podium in the third round while capping off the run with a solid drive in near darkness for the Round Four triumph. Defending champion Colby Dubato stood on the podium twice, finishing the season second in the standings while Eddie Shimmon recorded three top-five finishes to close out the series on the third step of the championship podium.

The VemmeKart Junior 100cc division made its debut at the Challenge in 2020. Over the four rounds, the class belonged to Alex Berg. The Canadian earned maximum points at each round to become the inaugural champion. Jacob Hoover placed runner-up to Berg three times to gain the second spot in the standings while Kiefer Peet finished the series in the third position. 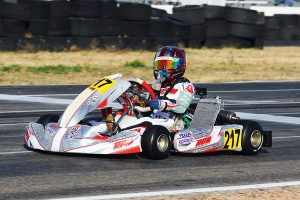 The 2020 season was one of the more competitive seasons at the Challenge for theApollo Motorsports Junior ROK class. Three different drivers won over the four rounds completed, as the top four finished within 43 points of each other. 2019 Mini ROK series champion Enzo Deligny earned the most points over the four race days to claim the Junior title in his rookie season. Deligny won the opening round in Tucson, finishing the weekend with a second podium finish. After missing the Friday practice day at CalSpeed due to a family vacation, Deligny recorded fourth place finishes in both main events to set the highest point total for the championship. Frankie Mossman solidified himself as a top Junior driver, earning two of the four victories on the program. A mere six points is all that kept him from leaving CalSpeed with the point lead and championship, ending the year with the second place trophy. Canadian Alex Berg added to his trophy case, placing third in the standings after three podium results. Maximilian Opalski was the third different winner, scoring the Round Four victory after missing the Tucson weekend.

Similar to the Senior category, the Mini division welcomed its 12th different champion over the 13 years of the Challenge. Tristan Young added his name to the list of title winners with the 2020 GFC Karting Mini ROK championship. Young won the opening round in Tucson and followed that by two runner-up finishes and a third place in Round Four to complete a four-podium run. Christian Cameron won the main events for Round Two and Round Three to have reached the podium in the first three rounds. In the end, Cameron was 23 points short to finish the year second in the standings. Alex Rantala had a similar score with a run of three podium results in the first three events, helping him to finish third in the championship chase. Parker Delong was the third different winner on the season, winning Round Four after not competing in Tucson. 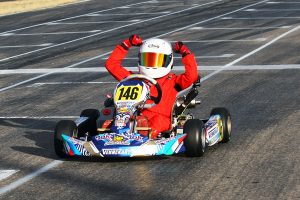 While numbers were not as high as hoped, the racing was exciting each and every time the Empire Karts Micro ROK drivers took to the track. Nearly all four of the main events were decided in the closing laps. Nico Sarphati was able to capitalize three times, crossing the line first in the final three rounds to earn the 2020 championship. Round One winner Kyle Drysdale never finished outside the top-two positions to place second in the standings. Cypress Andruss stood on the podium in all four rounds to join them on the championship podium in the third spot.

Plans for the 2021 Challenge of the Americas program are in motion. Next season marks the 14th year for the premier winter series on the left coast. The international series has secured three race weekends, continuing to host two rounds of racing at three unique and exciting circuits. Next year’s program is scheduled to open on January 22-24, 2021. The middle event is set for February 26-28, 2021 while the series finale is slated for March 26-28, 2021. Track locations will be announced in the coming weeks.

For complete information regarding the Challenge of the Americas and the California ROK Championship, visit challengekarting.com. More information, videos and photos can also be found on the Facebook and Instagram page.