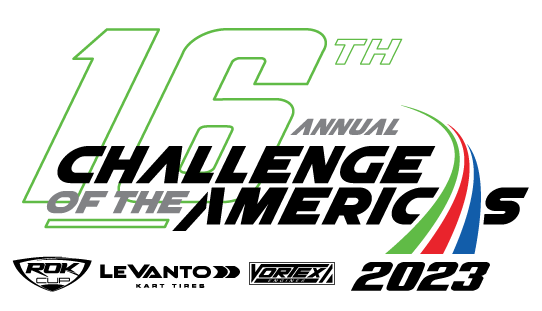 NAMPA, ID (September 21, 2022) – The locations have been confirmed for the upcoming 16th season for Challenge of the Americas program, beginning in February 2023. The premier winter karting series on the west coast is scheduled to travel to Arizona twice before wrapping up the season in northern California. The Challenge is excited to provide the 2023 season with events at the Musselman Honda Circuit, Phoenix Kart Racing Association, and Sonoma Raceway facilities.

The announcement comes following the statement made by CalSpeed Karting on September 15 that the Fontana, California facility will be closing permanently this coming December. The Challenge of the Americas had tentatively scheduled the series opener for the 2023 season for CalSpeed on the February 3-5 weekend. With the announcement of the popular southern California facility closing its doors, Challenge officials were forced to find a replacement, adding the Musselman Honda Circuit in Tucson, Arizona as the season opener location.

“The closure of the CalSpeed facility is not only depressing for us at the Challenge, but for the sport as a whole,” stated Andy Seesemann of FTK Promotions. “For the last two decades, CalSpeed has been a pinnacle part of karting for the Southern California region by hosting regional and club events along with the national scene with our program visiting eight times over the last 15 years. Thankfully, the staff at Musselman Honda Circuit in Tucson is happy to welcome us back for 10th time this coming February as we open season 16.”

The Musselman Honda Circuit was site of the 2021 opener and will host the opening two rounds of the 2023 season on the February 3-5 weekend. The remainder of the schedule features the same locations as 2021. Rounds Three and Four will be contested at the Phoenix Kart Racing Association in Glendale, Arizona on March 3-5. The final two rounds of the 2023 program is slated for the Sonoma Raceway in Sonoma, California during the April 14-16 weekend.

“This is the same schedule to last year’s program with a shift in dates for the 2023 season,” added Seesemann. “We worked with other karting series and promoters to provide the opportunity for racers and teams the ability to compete across the board during the winter months. I love the range of our tracks, each with their own characteristics that emphasize certain elements different from the others. We had several of the championships go down to the wire and I see no change coming in 2023 to crown the champions of the 16th season.”

CalSpeed closure effects plans for the summer series program in 2023 as well. As details for events during the summer months are in the works, a date and location has been confirmed for the Pat’s Acres Racing Complex. The Canby, Oregon facility will welcome a special event on the July 14-16 with FTK Promotions.

“We are excited to announce a third trip to Pat’s Acres Racing Complex in 2023,” Seesemann commented. “The Egger family has been part of my Challenge family for a very long time, and I am happy to continue that relationship by organizing another summertime event at their facility. Our goal is to continue to grow this event, and I hope my move here into the northwest will help build a solid foundation with the racers, teams and industry members in the area. Aside from that, we have paused our planning for the summer series and events due to CalSpeed closing with more updates regarding future summer events coming at a later time.”

Be sure to follow updates at challengekarting.com regarding the confirmation of the 2023 Challenge of the Americas locations and more information also announced on the Facebook and Instagram pages.