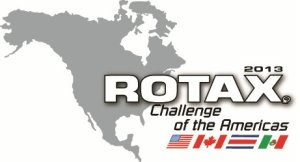 ORANGE, CA (December 5, 2012) – The 2013 season is just around the corner, and the Rotax Challenge of the Americas is preparing for another record breaking year. Ranked among one of the top programs in the world, the international Rotax Max Challenge series is happy to announce the opening of registration for all three events through January to March. Competitors and teams can now visit rotaxchallenge.com to find the link to sign up for the upcoming events, with four 2013 Rotax Grand Finals tickets to compete at the NOLA Motorsports Park in New Orleans in November up for grabs.

“Our series kicks off in roughly one month in Arizona and I’m truly excited about the 2013 season,” stated Rotax Challenge of the America promoter Andy Seesemann, who just returned from the 2012 Rotax Grand Finals in Portimao, Portugal. “This past winter, we saw great racing with very competitive fields throughout the three months, and battles for the series championships were decided on the final laps, if not the final few corners. Now with the recent announcement of next year’s Rotax Grand Finals coming to the United States for the first time, I have no doubt we will see some new names coming to compete for one of the four direct qualifying tickets that we will award to our champions in Senior Max, DD2, DD2 Masters and Junior Max.”

Seesemann traveled to the Kartodromo Internacional do Algarve in southern Portugal in support of the four Rotax Challenge of the Americas champions competing against the best in the world – Americans Phil DeLaO (Senior Max), Fritz Leesmann (DD2), and John Crow (DD2 Masters) along with Canadian Zacharie Scalzo (Junior Max). DeLaO qualified an impressive 10th overall but ran into trouble through the heat races and LCQ, thus unable to qualify for the main event. Leesmann fought engine issues all week and once cured, he drove his way from the LCQ and up to the 19th position in the Final. Crow made his first Rotax Grand Finals start, qualifying for Championship Saturday and placing 29th. Scalzo showed the never give up attitude, recovering from going upside-down on one of the infield berms, climbing out and getting back in so that he could complete the race. He ran all 18 laps to finish 29th overall.

“I was pleased with the effort all four drivers put in at this year’s Grand Finals, and they represented their respective countries and the Challenge of the Americas well,” continued Seesemann. “I met with officials at Rotax and BRP-Powertrain while there to support those four drivers, along with connecting with other Rotax Max Challenge promoters and competitors outside the United States and Canada. We received a lot of feedback about the program we provide here, and have heard from drivers in Mexico and other South American countries interested in competing this year at the Challenge of the Americas. We saw an increase in driver participation last year, and another increase is expected for 2013.”

The Rotax Challenge of the Americas schedule has three race weekends, counting toward six rounds of competition. The series kicks off at the Musselman Honda Circuit in Tucson, Arizona on the January 11-13 weekend. The following month is the PKRA Formula K Raceway north of Phoenix on February 8-10 with the 2013 champions to be crowned once again at the CalSpeed Karting circuit outside the Auto Club Speedway in Fontana, California on March 8-10. All seven Rotax Max Challenge categories will be offered for the 2013 season, with champions in the Masters Max, Mini Max and Micro Max earning a qualifying spot to their home country Rotax Grand Nationals. Each champion must be properly qualified by the Rotax Max Challenge rules of their home country to accept these prizes.