ORANGE, CA (December 4, 2014) – The 2015 Rotax Challenge of the Americas is set to begin its eighth season in just over a month. Over 150 racers are scheduled to open up the year at the Musselman Honda Circuit in Tucson, Arizona on January 9-11, beginning the three weekend journey toward the Challenge titles. Four of the seven champions from the 2015 season are guaranteed a spot at the ‘Olympics of Karting’ – the Rotax Max Challenge Grand Finals.

Champions from the Rotax Challenge of the Americas have competed at the world Rotax championship since the series began in 2008. Those drivers able to secure the titles in the Senior Max, Junior Max, DD2 and Masters Max categories this coming season are set to earn the direct qualifying ticket to the 2015 RMCGF event, with location and dates to be announced. The Masters Max title winner will compete in the DD2 Masters category at the Rotax Grand Finals. 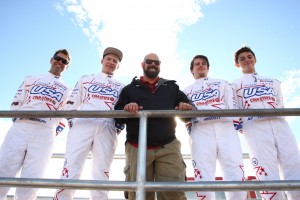 “We are excited to be offer this opportunity once again at the Challenge. Providing an opportunity to compete at the world championships for Rotax to four drivers is an amazing experience,” commented Rotax Challenge of the Americas promoter Andy Seesemann. “We have decided to offer our DD2 Masters Rotax Grand Finals ticket to the Masters Max champion for 2015. This decision was based on the entry numbers in both categories over the past several years. While this may be slightly unorthodox, I believe that it is the best decision for our competitors. For the past several years, our Masters Max class has had four to five times the entries as our DD2 Masters class. I foresee our numbers increasing in a big way with this new prize out there for our Masters Max drivers.”

The remaining Challenge series champions in DD2 Masters, Mini Max, and Micro Max will receive a sponsored entry into the United States Rotax Max Challenge Grand Nationals, scheduled for August 6-9 at the Carolina Motorsports Park in Kershaw, South Carolina – should the driver be from the United States.

The 2014 Challenge drivers at this year’s Rotax Grand Finals competed with Team USA – Austin Versteeg (Junior), Phillip Arscott (Senior), Gavin Reichelt (DD2), Alan Rudolph (DD2 Master), pitting them against 71 other drivers in their respective categories from nearly 60 other countries. Arscott, Reichelt and Rudolph all qualified for one of the 34 positions in the main event, beating out 38 other drivers. Rudolph led the United States squad, recording a best finish of fifth. In fact, eight of the 21 drivers that made up Team USA were competitors at the Rotax Challenge of the Americas in 2014, along with Team Canada drivers Bryce Choquer and John Buzza.

During this year’s Rotax Grand Finals, BRP presented the new Rotax 125 Max EVO engine, the new evolution of the existing Rotax powerplant. The new generation is focused on improved durability, lower operating costs with less maintenance, and ease of drivability. The EVO engine offers a new Dell’Orto VHSB 34 XS carburetor, which was utilized at the 2014 Rotax Grand Finals. A new electronic box with new timing for different engine specifications with a new electronic exhaust valve that includes two different switch points. A new battery unit is integrated with the on/off/start switch and new exhaust system are two new features you can visually see when looking at the new EVO package. Inside the engine, a new connecting rod has been designed with an advanced hardening process which allows for improved lubrication, and the profile of the piston has changed, providing a shorter break-in time while still providing a reduced wear rate.

“These product evolutions are exciting and will be an improvement on an already incredible product line,” continued Seesemann. “Since being part of the Rotax program in the United States since the very beginning, it’s great to see Rotax take the engine to the next level, while keeping the dealers and customers in mind. Because of the timing in the release of the new EVO, the Rotax Challenge of the Americas will follow the 2014 engine rules for the 2015 series. None of these new items will be legal for use, coinciding with our counterpart series, the Florida Winter Tour.”

April 1 is the set date for the new Rotax 125 Max EVO engine to become legal in competition in the United States. That includes all the United States Rotax Max Challenge programs, which the So-Cal Rotax Challenge program falls under. For the first event scheduled for February 28 at Adams Motorsports Park (with SoCal Sprinters), engine rules will follow the 2014 structure.

Registration is still open at Registration.RotaxChallenge.com website, along with information on host hotels for all three events in 2015 under the Schedule & Tracks menu ofRotaxChallenge.com. Racers are encouraged to book their rooms early for all three events, as hotel rooms may be difficult to secure due to other events in each city during the same weekend – especially for the Phoenix rounds in February. The deadline to pre-enter for the January event in Tucson is December 26, 2014.

For more information on the 2015 Rotax Challenge of the Americas, be sure to bookmark www.rotaxchallenge.com and watch for updates as the season draws closer.