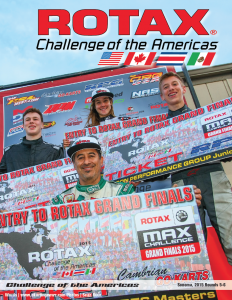 Sonoma 2015 Issue
Selliken, Robb, Bonilla and Cook set to join Team USA at Rotax Grand Finals after claiming series titles. As with any series finale, championships were on the line this weekend at the Simraceway Performance Karting Center for rounds five and six of this year’s Rotax Challenge of the Americas.  Saturday’s event served to clear up the overall picture of the point races, showing that two competitors have all but clinched their respective titles.  Sting Ray Robb (Tony Kart) triumphed in his main event to take control of the Junior Max class, while Diego LaRoque (Benik) won his fifth straight Micro Max finale to complete his title aspirations. The final day of competition for the Rotax Challenge of the Americas went into the books after another beautiful day of weather at the Simraceway Performance Karting Center in Sonoma, California. With four remaining class champions yet to be crowned it came down to the wire, and even beyond that to decide this year’s outcome. For the four headline divisions, it provided four drivers with the opportunity to compete at this year’s Rotax Grand Finals, scheduled for Portimao, Portugal in November. All four drivers – Luke Selliken (Senior Max), Sting Ray Robb (Junior Max), Paul Bonilla (Masters Max) and Sabre Cook (DD2) will represent Team USA at the ‘Olympics of Karting’ thanks to their Rotax Challenge of the Americas title.