Challenge of the Americas Digital Publication 2014 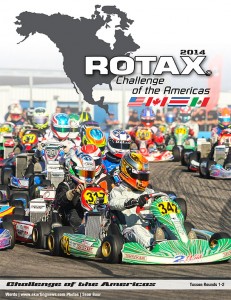 Tucson 2014 Issue
Opening round welcomes plenty of new winners to the series
The first round of the 2014 Rotax Challenge of the Americas was a day of firsts. The Musselman Honda Circuit welcomed over 130 drivers to begin the six round championship series, greeted by perfect racing weather in Tucson, Arizona after a cold and windy day on Friday. Each of the seven drivers to claim the top spot of the podium for round one experienced their first, whether it was a first victory at the track, first in the class, or a first victory in the series, it was a historic day as the chase toward the titles began.