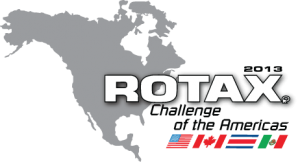 ORANGE, CA (December 28, 2012) – In just two weeks, the journey toward the 2013 Rotax Grand Finals in New Orleans begins as one of the first Rotax Max Challenge programs opens the new season – Rotax Challenge of the Americas. The Musselman Honda Circuit in Tucson, Arizona will host the top drivers from across North America on January 11-13 as they contest the opening two rounds of the international Rotax series, where four of the class champions will be awarded with a ticket to the ‘Olympics of Karting’ set for November of 2013.

Seven karting companies have step up to offer their support of the Challenge of the Americas program for the 2013 season as class sponsors, all authorized Arrive and Drive vendors for series events. Each offers a wide variety of trackside support for the three weekends of The Challenge, servicing all the Rotax Max Challenge categories.

Senior Max – Buddy Rice Karting: Owned and operated by 2004 Indy 500 winner Buddy Rice, BRK is a longtime supporter of The Challenge. Buddy Rice Karting is the official importer of Energy Karts and distributor of OMP, Uni Pro and Rotax products. Their trackside support is among the best within the industry, providing mechanics, data analysis, driver coaching, kart prep, catered hospitality along with Rotax engine service and rental. With numerous local, regional and national titles to their credit, including the 2012 Mini Max title with Christian Brooks and Junior Max with Parker Thompson in 2011, Buddy Rice Karting continues into the 2013 season in search of more hardware.

DD2 – Dallas Karting Complex: One of the newest facilities in the country is the Dallas Karting Complex, located east of the downtown area in Caddo Mills, Texas. DKC hosts an 8/10-mile course on 25 acres with a state-of-the-art main building that houses meeting or banquet rooms, a kart shop and kart storage area. The operation is the Sodi Kart distributor for the United States and promotes the Rotax Max Challenge in their local racing series. Co-owner Mike Jones drove to victory aboard a DKC Sodi Kart entry at the 2012 Pan American Challenge in Colorado to secure a ticket to the Rotax Grand Finals. Their DD2 trackside support is among the best in the country and is taking it to The Challenge in 2013.

DD2 Masters – Billet Performance Karting: Located in Parker, Colorado, BPK is the Rocky Mountain dealer supporting the Arrow Racing Karts brand. Owned by series racer Mike Urban, the company supports the major Colorado karting events along with The Challenge. Their support in 2012 helped John Crow secure the series championship, earning him a ticket to the U.S. Grand Nationals where he qualified for the 2012 Rotax Grand Finals. Their trackside Arrive and Drive program will continue in 2013 at The Challenge.

Junior Max – Rolison Performance Group: The Rolison Performance Group is among the leading race team operations in North America. Mike Rolison, former U.S. Rotax Grand Nationals champion, built a career around driver coaching along the west coast, and has taken it to the next level. Supporting the Kosmic chassis brand and an official Rotax Service Center, Rolison and RPG can formulate a specific program around every driver to help them reach their goals, no matter the level of competition. RPG helped guide Joey Wimsett and Johnny Blair to U.S. Rotax Grand Nationals titles in 2012, and become members of Team USA at the Rotax Grand Finals.

Masters Max – CRG-USA: One of the newest CRG chassis distributors for the United States is CRG-USA. A strong supporter of The Challenge, the Colorado-based operation has grown since its inception two years ago as one of the top race teams in the western half of the country. In addition to their race team, they also support a full range of parts and services for all CRG drivers competing in the series, including former champions Nicholas Latifi and Felipe Fraga.

Mini Max – HoleShot Drive Systems: A leader in the sprocket and chain market, HoleShot Drive Systems can be found on many of the karts competing at The Challenge. Manufactured by Whisler Racing Services, owner AJ Whisler spent countless hours of testing and development to produce the absolute best possible driveline package. His Team WRS race team and trackside support program helped assist Fritz Leesmann toward The Challenge title in DD2.

Micro Max – Overdrive Motorsports: Based in Calgary, Alberta, Canada, Overdrive Motorsports has over 20 years of experience in the sport to provide specialized long-term working relationships with drivers in all Rotax categories to enhance their skills. Owner Joey Guyon has been a long supporter of The Challenge. From chassis to engine development, Overdrive can take drivers to the next level. A distributor of the PCR chassis, Overdrive is a full-time Rotax Service Center and Distributor with countless hours of on and off-track testing.

Gatorz will continue their support of the Challenge of the Americas in 2013. The awards ceremony after each round will take place at the Gatorz Podium with all winners awarded a certificate for new Gatorz eyewear. The Challenge will also provide the top three finishers with specialized series hats – stamped with their accolades including, position, class, sponsor and track – to be worn throughout the paddock.

Today also marks the final day of pre-registration for the Tucson event. Any entry forms received after December 28 will be assessed a $100 fee, including at-track registration. The Challenge would also like to remind all competitors to review the 2013 series rules summary for any new updates and changes, including the new Mini Max Rev Limiter and D1 tires for Junior Max, Mini Max, and Micro Max. The Challenge of the Americas has partnered once again with eKartingNews.com to provide Trackside Live coverage throughout 2013. Live audio and live timing will be broadcasted on their Live page (ekartingnews.com/live) from qualifying to the last checkered flag for each of the six rounds of racing.

To submit your entry for this year’s Challenge of the Americas or for anything else pertaining to the series, visit www.rotaxchallenge.com